WIRES gathers the latest transmission data, reports, and news to help keep our members up to date on the latest industry trends.

As the power grid continues to transition to one that is increasingly reliant on intermittent resources to meet demand for clean power, the role of transmission in delivering the output from these renewable resources has never been more critical. Over a decade ago,...

An estimated 70 percent of transmission and distribution lines are well into the second half of their 50-year life expectancy, and some lower voltage components are even over 100 years old. The report finds that reconductoring and rebuilding existing transmission...

The new "Net-Zero America" research outlines five distinct technological pathways for the United States to decarbonize its entire economy. The research is the first study to quantify and map with this degree of specificity, the infrastructure that needs to be built...

A national US power grid would make electricity cheaper and cleaner

OpEd: Reviving the economy should start with the US power grid

According to estimates from the Lawrence Berkeley National Lab, by 2030 state-specific clean energy demand standards are expected to amount to: 600 TWh to 714 TWh. The latter is ~17% of current U.S. retail sales.

Investment in transmission is not keeping pace with renewable energy generation , which is often far from load. Only about 1,300 miles of transmission were completed in 2018 and even less in 2017, compared to the peak of 4,500 in 2013.

ScottMadden’s analysis for WIRES (1/20) finds that without strategic and timely expansion of the transmission infrastructure, the ability of states to meet their clean energy mandates by 2030 may be in jeopardy . 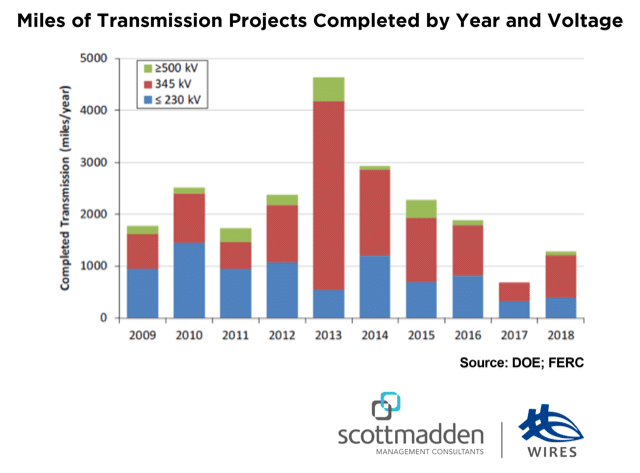 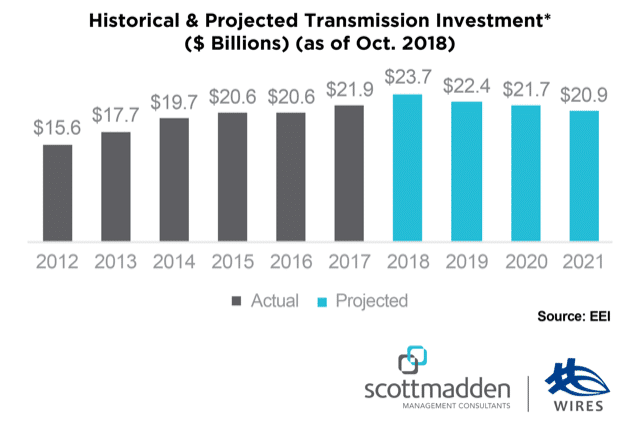 According to the US Department of Energy in The Smart Grid: An Introduction (PDF, 4.5 MB), outages and power quality issues are estimated to cost American business more than $100 billion on average each year.

By 2030, electrification of transportation and heating sources could increase nationwide annual energy demand by 5% to 15%.

Investment in the electric grid will:

A more robust grid helps protect against and recover from all types of unexpected events, including deliberate attacks on our infrastructure, while a weak and congested grid makes the system vulnerable to disruption.

According to a 2019 Brattle Group report for WIRES, $30–$90 billion in incremental transmission investments will be necessary in the U.S. by 2030 to cost-effectively meet the changing system needs due to electrification, with an additional $200–$600 billion investment required between 2030 and 2050.

With C$45 billion in planned Canadian transmission investments through 2030, averaging C$5 billion annually over the next several years. This level of Canadian investment will support between 20,000 and 50,000 fulltime jobs annually.

In a 2018 analysis, London Economics International found that an Eastern Interconnect sample line designed to increase capacity between two regional markets operated by PJM and MISO delivered broad benefits to the economy, workers and consumers in the 3-4 years leading up to the project and in the first 15 years of operation:

In addition to these employment and economic stimulus benefits from constructing the facilities and manufacturing equipment, strengthening of the transmission grid provides other important economic benefits, including: